Travelling in Germany as a Vegan is a walk in the park! The Vegan lifestyle had a boost in the last 10 years and you will find many shops, Cafés or Restaurants catering for Vegans.

If you are on a budget or in self catering accommodation, those (organic) supermarkets will offer a huge Vegan variety:

You will find that supermarkets like Aldi, Lidl, Edeka, real etc. also offer a Vegan range.

Almost every Café will have a Vegan / Gluten Free option and being a travelling Vegan in Germany is no problem whatsoever! Whereas you’d be looked at as if you were an Alien 15 yrs ago, asking for Vegan options, it is very common today.

I am just travelling in Germany and went to a very ordinary, big Café / Restaurant today and found a Vegan Burger on the menu. I completed it with a self made Blueberry / Pomegranate Ice tea and had a most delicious meal.

There will be areas of Germany where being a Vegan can still be tricky (Bavaria or East Germany for example) but places like Berlin, Cologne and Dusseldorf are very Vegan friendly.

It is great to see how the Vegan market has grown! 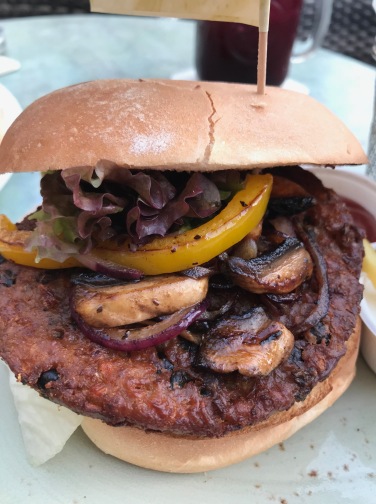 I will be travelling again soon by car and ferry and already tried to get my head around what food I need to take with me. But today I saw this in my local supermarket. Really happy as sometimes it is necessary to have an “quick & easy” meal.
I am not a fan of ready made food as some of you might have gathered already, but there are times when the options are limited. Maybe you go camping or you just recover from a bad cold or flu and are not back to shape to be in the kitchen yet.

All of those are Vegan and 12 p go to a good cause (Farm Africa). If it were organic, it would actually be perfect!

I have tried other brands as well and liked them. It’s very easy to add your own Veggies or spices and make it a bigger meal, if you’d like to.

I don’t know if this product is available outside of the UK, it is made by a UK producer and I found it in Sainsbury’s. So you might have to do a wee research if it is available in your area.

I live in Edinburgh and this is a great place for Vegans. There are many options available, you’ll find a Vegan sandwich at the airport (to be fair, there is only one on offer) but also in small supermarkets. On market days, you will finde Vegan stalls (in Leith for example) and in the City centre are two restaurants that I really love:

Hendersons runs a couple of places, including a Deli and has one Vegan restaurant on Thistle street.

David Bann offers yummie Vegetarian and Vegan options. Every time I go there the food is delicious.

One of the oldest Pubs in Scotland, The Sheep Heid, situated in the old part of Duddingston (close to Arthur’s Seat) introduced a Vegan menu just this year. I love to go there as it has a great atmosphere and Duddingston Loch around the corner.

You certainly will find Vegan options in the Italian, Indian and Scottish restaurants and Cafés. Even the typical High / Afternoon Tea at the Balmoral Hotel can be enjoyed in a Vegan version.

If you go to Edinburgh’s seaside, Portobello, you will find The Beach House, sitting prominently on the Promenade where Vegan Breakfasts, Lunches, Cakes and Beverages are on offer. Their Dirty Chai Latte is really great (I order it with Oat milk).

Vegan produce (like Bars, Tofu, Yogurt etc.) can be found in Holland & Barrett, Real Foods and many small places.
The famous “Fudge House” on the Royal Mile recently also introduced a Vegan Version of the super treat.
So does The Fudge Kitchen (they usually offer 2-3 Vegan versions), also located on the Royal Mile.

As far as accommodation goes, there will be plenty of Vegetarian B&Bs. I know one that also caters for Vegans, McRae’s on East Claremont Street which happens to be an organic B&B as well! Lovely rooms, great hospitality and tasty breakfast.

So coming to Edinburgh for a City break as a Vegan is great. The City itself is called “Athens of the North” and once you have been here, you will know why. I am not a city person but the first time I laid eyes on this beautiful place, I fell in love.

One of the oldest Pubs in Scotland 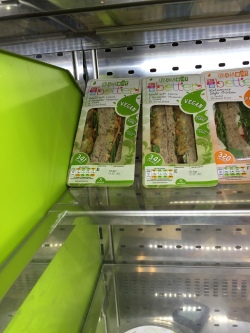 View from The Beach House, Portobello 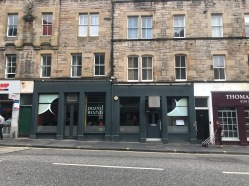 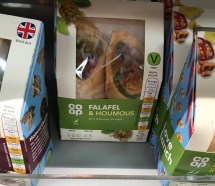 I love travelling! The excitement of new places, different cultures, meeting new people and learning new things is in my Genes. As a Vegan it can be tricky to travel abroad, depending where you go. The United States and Germany for example are very advanced when it comes to Veganism. Other countries, like France, can prove a challenge. However, it depends on how strict of a Vegan you choose to be. If you do not mind to make the choice of a Vegetarian option, it is actually quite easy. Having said that, most of the time there are ways to get something Vegan on your plate.

As someone who likes to be prepared, I always, travelling far or just leaving the house, have a snack in my bag. Mostly this would be a nut bar or even taking my own sandwich with me. I don’t see this as a hassle as I do prepare 99% of my food anyway.

The easiest way is self-catering during your holiday of course when it comes to Vegan food. It might also be much cheaper than going out all the time.

But there are options available and I will share my experience of travelling as a Vegan with you. Just follow me :).

Vegan options in a Hotel in Spain 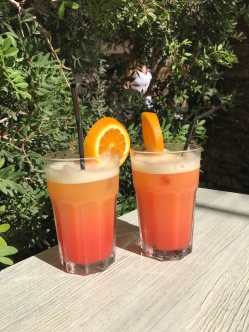 There are lots of vegan drinks! 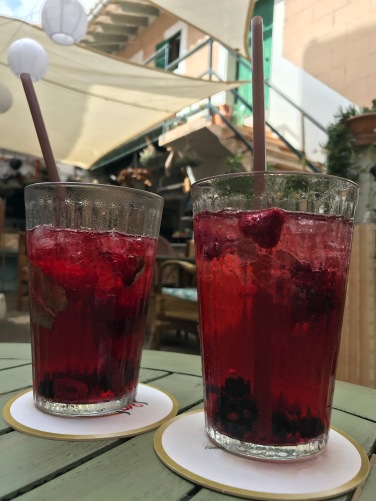